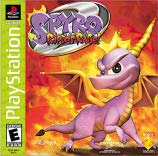 Does music for future SPYRO games need to sound just like the music from this one?

OVER THE LIFE OF THE MEDIUM, GAMES have been defined in part by their role as marketing-driven assistants to the grand Hollywood machine. In no other form of entertainment does the concept of sequels flourish quite as much as it does in the world of games. Endemic to both of these facts is one central truth: Games frequently exist solely to give players more of what they already love.

Everyone involved in expanding an existing franchise plays a delicate balancing act between faithfully rendering what the players expect and infusing a new creative mark on the title. A team of artists and designers tackles the look, while an army of production staff tackles level design, gameplay, and the script. Only when it comes to music isa large chunk of responsibility for the game’s faithfulness to players’ expectations frequently placed into the hands of a single person: the composer.

With so much riding on the composer’s shoulders, the first step in any franchise game is to understand the project’s intent. A franchise game will only ever do one of two things: stay true to the original material or veer off in a new direction in an attempt to reshape an existing intellectual property.

Any composer working on a franchise that’s faithful to its predecessors must begin by doing his or her homework. Consider all the music that came before you to be the temporary track (or temp track) for your game and the overriding creative direction to which you’re being asked to adhere. Watch the film(s) or play the original game(s). Familiarize yourself with the musical language of the original source score. Make sure you’re familiar with all the thematic material that may be applicable to the game, including character, location, or key event themes. Take note of the original instrumentation or any signature production techniques that define the original. Firmly ground yourself in the music of the world into which you’ve stepped. Your music is a linear continuation of work already familiar to an established audience and needs to fit as a natural extension of the existing musical language.

IN THE KEY OF ELEMENTAL

That said, a new STAR WARS game does not automatically mean using John Williams’ music any more than a new SPYRO game means using music akin to Stewart Copeland’s work on SPYRO 2: RIPTO’S RAGE. Games aren’t movies. Characters, when ripped from a film and plummeted into a game, can sometimes find themselves engaged in everything from dodge ball to vehicular combat to button-mashing brawls on the interactive screen. Because games are a great way to expand the universe of an existing IP into different genres, composers will frequently find that they’re being asked to reinvent the music of a franchise rather than re-create it.

When this is the case, the composer must first distill the essence of the original score. The challenge is to depart from the existing music without stepping so far away that the soundtrack feels as though it’s not part of the same universe anymore. Again, established motifs, signature instruments, or stylistic genres will provide the framework within which your reinvention can take shape.

However, rather than dictating the full scope of your music, these hooks can function as sign posts to listeners, letting them know they’re still within their beloved world. Input from the production team as well as concept art and design docs will help you determine the new tone and direction of the IP and its made- over sound.

One of the more challenging jobs composers face is the task of scoring a game tie-in to a movie that’s still in production. When the film comes out, the movie’s score will become the definitive soundtrack for that new universe. But due to differences between production schedules for games and films, it’s entirely possible that the game may have a composer writing before the film’s composers have even started—let alone finished—their score.

These days, composers can benefit from recent strides made across the industry to better integrate film and game production teams. If the film already has a composer, the game’s producers can most likely arrange for you to have a conversation via phone or email.

If you get the opportunity, pick their brain about everything from instrumentation to thematic motifs. Push the game’s production staff to acquire any assets that might be helpful and available, such as rough mixes of the film score, DATs or Pro Tools sessions of the film’s scoring sessions, or photocopies of the conductor scores. While you’re unlikely to get all these things, any one of them can be a huge help in miming as-yet unreleased material.

If the film’s composer is unavailable or none of the final score is accessible to you, ask if you can either see a rough cut of the film or hear the film’s temp track. While not as helpful as the actual score, the temp track will give you an idea of the direction in which the film’s score is moving and the original intent of the director.

With any franchise game, the most important thing to remember is that the sandbox for the world you’re working within already exists. You’re simply being allowed to build your own castle.