To start the new year we interviewed Chance Thomas on his recent work for Dota 2.  Released as part of the Compendium in fall 2014, the score has been purchased by around 4 million people.  Chance has also worked on titles including the Lord of the Rings Online,  James Cameron’s Avatar, Peter Jackson’s King Kong, The Hobbit, Star Wars, Monopoly, Dungeons & Dragons, Heroes of Might & Magic, Left Behind, X-Men and many more.  Among his many other awards he was presented the GANG Annual Recognition award in 2013.  For more info on Chance check out his website at http://www.chancethomas.com/ 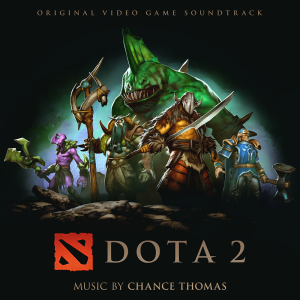 RS: How did you become involved in Dota 2? What was the process like working with Valve to create the music?

CT: This past Summer, Tim Larkin and Mike Morasky told me they were thinking about doing a music reskin of the game. Would I be interested? We sort of left it with, “Well YEA! I’d be interested!” A few weeks later they said they wanted to move forward, so we started working out the details.

The target for the new music style really intrigued me – epic, fantasy, modern, Medieval, sports music. I couldn’t really wrap my mind around it at first. I struggled. Then I imagined myself as Axe suited up like an NFL player for a big Monday night game a thousand years ago in some place like Azeroth or Middle-earth. That probably sounds a little crazy, but when I imagined myself in that situation, with Necrolyte or Night Stalker closing hard on me, then I started to hear music in my mind. That’s always how it has to start with me. I have to hear it in my mind first, feel it inside so it makes sense, then the music composing process starts in earnest.

The first track I wrote was the Startup music. This is where I introduced the motifs that I would later weave into the balance of the game score. You can hear the Startup track here: https://soundcloud.com/chancethomasmusic/startup-from-dota-2-compendium-2014

Once I had this initial track, it was Tobin Buttram from Valve who really got down in the trenches with me on the score. Initially, he helped me figure out the game play. It’s pretty complex in some ways, actually. I started playing, but didn’t really plug into the flow of the game until I started watching tournament games. After watching lots of tournament games, I was able to identify the various gameplay modes of laning, battle, Roshan, smoking, dead, and even identified strategic choices for early game, mid-game and late game leading to the conquest of the enemy’s Ancient.

I think a composer really needs to understand the flow of a game in order to write the right music. How can you possibly succeed in carrying people along on the right emotional current if you have no idea where the currents are flowing? Once I had a handle on the game, I drew up a flow chart showing each game state and all the ways it could potentially hand off to other states in the game. Now I knew how to move the score along harmonically from one track to the next, rhythmically and even palette wise, to give the right sense of emotional movement to the music. After that, the various tracks started coming together pretty quickly. It took about 3 weeks from blank page to finished score.

RS: How involved were you in the production side for Dota 2?

CT: Let’s talk about the recordings for a moment. I recorded the score with live strings, brass and choir sections. The string configuration was 10-10-8-6. Brass was 2-6-3. Choir was 6-6-6-6. We hung three different mic pairs in the room, plus spot mics. We ended up using mostly one pair of room mics, a pair of Josephson E-22’s. I was really pleased with the sound. Here’s a look behind the scenes at the recording sessions: https://www.youtube.com/watch?v=-vxhPshj2tc

Everything was recorded into Pro Tools, which I took back to my studio, HUGEsound, for editing. I like to record lots of takes, then dig through them with a fine tooth comb and build the perfect performance. I can get pretty OCD about it, to be honest. Narada Michael Walden once spoke to a group of us about recording 100 takes of Maria Carey singing “Vision of Love”, then editing this breath, that consonant, this syllable, etc. together, in order to build the best possible performance. It made quite an impression on me. I do the same thing.

After editing all the tracks, I booked a sweet mixing studio with lots of great outboard gear (image right). It was round the clock mixing for a very long week. I literally mixed until I passed out, then pulled a couple of chairs together to sleep, then went at it again. I tried to prop up my body with lots of kale and spinach health drinks (ugh, they taste horrible), which I chased with protein drinks. It was crazy, but I pushed through and met the deadline. Epic!

After production, Tobin took all the tracks and tested them in the game. The team played through and made some comments, which led to revisions on one of the layered tracks and a couple of stingers. But for the most part, our pre-production work paid off handsomely. The score plugged into the game seamlessly, and I highly recommend paying the price to really understand the game up front.

RS: Dota has a very large, vocal community, which has received your work incredibly well. Did you consider their expectations in the way you created the score?

CT: Every composer wants to knock it out of the park for the players. That’s what we live for. I was aware that DOTA 2 players can be merciless, and I really hoped to not disappoint them. Of course, I’ve had some experience writing for die-hard fans before with all my work in the Tolkien universe. I was really happy when the new music hit a resonant chord with the community.

RS: Did the music from the original Dota mod impact your music? If I understand correctly Jason Hayes and Tim Larkin wrote the main theme to continue on from the original mod? Was there any further collaboration?

CT: I really loved the work Jason and Tim did on the original, and was hoping to collaborate with Tim on this reskin. But he was slammed, getting all the documentary footage together and scored to play at the big T14 tournament. Hopefully, we’ll get a chance to collaborate on some new music in the future. Of course, Tim and Jason had already figured out the three layer approach to scoring the original, and all the right places to put the various stingers and combat tracks, so I leaned pretty heavily on the music design work they had done. That was incredibly helpful, especially with our tight deadline.

RS: I’m always interested to know what composers you have been inspired by, both in games and in general?

CT: You don’t have room to print them all! Literally, I have hundreds of musical influences. From the early classical composers I studied as a child (Bach, Tchaikovsky, Mozart, Rachmaninoff, etc.), to the art rock bands of the 70’s (Kansas, Yes, Styx, Boston, etc.), to the R&B greats (Earth, Wind & Fire, Michael Jackson, James Brown, etc.) to singer-songwriters (Kenny Loggins, Billy Joel, Loreena McKennitt, etc.), to the best film composers (James Newton-Howard, John Williams, Danny Elfman, James Horner, etc.) to my peers in gaming (Garry Schyman, Jack Wall, Russell Brower, Jeremy Soule, etc.), to the talented composers working at Valve. I could go on and on. As could any composer. We live in a world rich with music, accessible at our fingertips. What a luxury.

RS: After having worked on such an impressive array of games do you have a set process for composing a score? How do you usually begin to compose for a new project?

CT: Yes. I always try to imagine myself in the game world first, as if it’s real. This is similar to a method actor’s approach to a scene. If I can see it, feel it, live it, breath it, smell it… then the real emotions I would feel in that situation start to surface. Once the emotions surface, then the music starts to come. Once the music starts to play in my mind, then I sit down and put together a scoring palette for the project that matches what I’m hearing. Then it’s time to start writing.

RS: Is there any other final advice or wisdom you’d like to share with the GANG members?

CT: Keep on making great music! I love screening for the GANG Awards each year because that gives us a chance to hear the best music and sound that we, as a professional body, have produced over the past 12 months. It always blows my mind, the talent, the creative energy, the innovation… it’s so inspiring to hear everyone’s work. It inevitably pumps me up. Makes me love being a composer all over again.