With summer approaching, DOTA 2 has released its latest Battle Pass to commemorate The International 2018. No stranger to DOTA 2’s competitive atmosphere, Chance Thomas returns as composer for this year’s update, taking players through a new and energetic musical experience. To kick things off, check out this behind-the-scenes video where Chance shares some of his process, and introduces us to singer Jenny Jordan and guitarist Nick Petty!

EL: In your BTS video, you talk about working together with key collaborators. What was your selection process, and how did you go about finding the right fit for your tracks?

CT: One of my favorite things about any music scoring project is the joy and surprise of collaborating with other talented creatives.  In this case, there was no budget for a live orchestra (my usual playground of choice), so I had to think carefully about what flavors I could use to bring some spice to this score.

I finally decided on a sampled orchestral base, jacked up with lots of live electric guitar, then overlaid with female voice for a fantasy sheen.  I auditioned singers by having them improvise on a theme in one of the songs, Enter The Champions.   I called five different singers.  All were good, but Jenny, who I’ve worked with before, just delivered the magic.  And she’s fabulous to work with in the studio, so much positive energy, takes direction like a pro, and what an instrument! 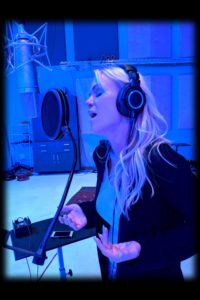 For the guitar, I also had lots of options.  Rich Dixon, Mike Dowdle and Ryan Tilby have all thrown down their magic on my scores over the years.  But earlier this year, my go-to cellist, Nicole Pinnell, introduced me to a new guitarist, Nick Petty, for a Disney project I was working on.  Nick had such a fresh voice, and delivered such stellar tracks, I decided to bring him on for DOTA.  He has incredibly quick finger-picking action, so I wrote some crazy fast riffs for him to play.  It was so fun to watch him dig in.  He totally nailed it.

EL: What were some of the primary tools used for this particular project?

When I’m working on a score, I scribble down my ideas on paper.  That’s what you see scattered across the right hand mi 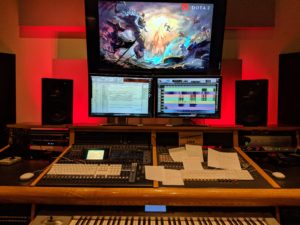 xing desk in the photo below.  I play in all the parts one at a time from a classic Korg Trinity keyboard controller, and particularly enjoy playing in percussion grooves on its bouncy keys.

I do tracking, layback, editing and mixing in Pro Tools.  Sheet music prep is handled in Finale.

But as readers of my textbook (Composing Music for Games)* will tell you, all of those tools pale in comparison to a composer’s most important tool, and that is the juggernaut of a tool sitting between our ears.  Imagination.  Lots of it!  Creativity.  Run free!  I tried out most of my ideas internally first before turning outwardly to the technology in the studio.

Finally, lots of gameplay footage (thank you Twitch) and animation.  DOTA has an in-game tool called Source Filmmaker that can capture gameplay and turn it into third person animation.  It’s stunning.  I used lots of that footage to pull me into the game world.

EL: For your tracks, what kind of personal experiences did you draw from that led you to make the musical choices you did?

CT: For starters, the absolute spectacle of attending a DOTA 2 International.  I’ve been in Key Arena when it was filled to overflowing with DOTA 2 players and fans.  I’ve felt the intensity of competition as the final few teams battled it out for a multi-million dollar purse.  That energy, that larger than life eSports phenomenon, and my personal reaction to it – this was a key well that I drew inspiration from to frame the scale and bombast of the score.

I’ve also played the game and watched skillful people play the game.  This gave me data from which I could make informed inferences about pacing and timbre.

Fantasy music has been my bread and butter for 20 years.  Deep experience in the genre suggested certain harmonic patterns, melodic tendencies, and orchestration choices.

Finally, I took a page from the 70’s rock band Kansas, and threw some frenetic electric guitars and gnarly bass at the orchestral arrangements to give it some unique character.

EL: When working with Valve, are you mostly set loose to accomplish your task, or do they have strict guidelines and style guides that you follow?

CT: Valve is a world class operation with top people overseeing their music.  They gave me a clear outline as to the music design and how the finished tracks needed to work inside the game.  I had already been down this path once before with them, having done the first ever music pack back in 2014.  So I knew the drill on the logistical and technical side of things.

Creatively, they let me run wild.  Tim Larkin, who hired me for this project, knows my palette pretty well.  We’ve worked together since the late 1990’s, so we’ve had a chance to build up a lot of trust.  He offered some great direction at the very beginning, helping me tailor the sound of the first couple of cues.  But then he went off to Hawaii or something, leaving me carte blanche for the balance of the score.  You gotta love that degree of creative freedom and client trust.

EL: What was the schedule and deadline like, and how did you go about handling it?

CT: Let’s begin with this reveal:  I was not the first choice to do this music score…

The DOTA 2 team likes to have a new composer every year for its annual music reskin.  They say it’s like having a different performer each year for the Super Bowl half-time show.  I get that.  I’d already done their first “half-time show” back in 2014.  So I was surprised when I got a call asking if I would be interested in doing it again.

I love DOTA 2 and was thrilled to get the invitation.  But I was curious about it.  I’ve learned that another composer had apparently been selected earlier, but for whatever reason, things didn’t work out.  So they called me and I was ecstatic to be back in that world again.

First thing was to get the contract in place.  Please don’t risk working without a contract, even with a trusted friend representing a triple-A publishing company.  This is business, and business parameters need to be defined with clarity.  It took a few days to get things ironed out, but SO worthwhile.  Spend the time, get the agreement that you and your client can both set your signatures to.  Totally worth it.

Next was the music design.  DOTA 2 requires a varied music design.  Some of the music would be delivered as one-shot standalone tracks.  Some tracks were additive, where you have three layers of music sitting in one segue-able track.  Some tracks were designed to begin with an intro, follow up with a looping section, then tag with an ending.  And there were some stingers.  So I had the full spectrum of music design constructs to write around.  I needed a map to follow, to make sure each music track would flow naturally from one to another.  I put this flow chart together to keep me aligned. 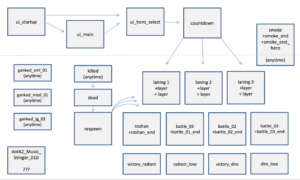 There were only three weeks left to compose and orchestrate the score.  No time to waste.  I circled the deadline on my big desk calendar and worked backwards, dividing up the amount and type of cues by the available number of days (and nights).  I put together a strictly rigid writing schedule and adhered to it religiously.  This meant sleeping in the studio during the week, and only going home on Saturday night to take Sunday off and recharge.  I’ve been an avid proponent of careful lifestyle management throughout my career, but I’m also not naïve to the occasional realities 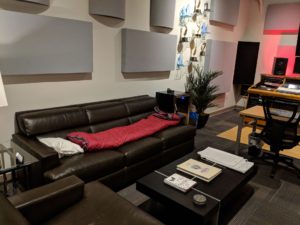 Next step was to figure out the stylistic approach I wanted to take and build a template for scoring.  This took the first couple of days in my schedule, as I tried out a number of different approaches in my mind.  People who walked into my studio during that time would find me pacing around, singing, beat-boxing, finger-drumming on my desk or clothes, laying on my back staring intensely at the ceiling…  This was the most fertile creative period of the schedule, where I honed in on a unique voice for the score inside the workshop of my imagination.

After that, it was basically off to the races.  Write quickly but don’t get sloppy; trust first instincts but take time to listen critically and revise as needed; start with the template but don’t be a slave to it, reaching out for new sounds when necessary.

It worked.  I succeeded in composing the entire score in three weeks.  I then took the fourth and final week to record everything into Pro Tools (including the live guitar and vocalist), edit all the tracks, mix the score, then cut everything up and format convert into the final delivery format.  Mission accomplished.

EL: BONUS QUESTION – Who is your main DOTA 2 hero, and why? 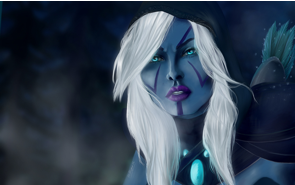 CT: Gotta be the Drow Ranger.  She played a prominent role in the gameplay capture I composed to.  I also have a DOTA 2 poster outside my studio door which happens to feature her prominently.  She rocks! 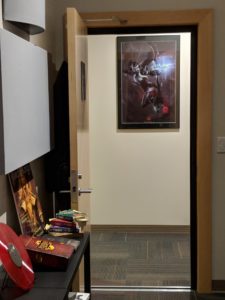