MEDIA MOLECULE’S LITTLEBIGPLANET (LBP) was one of the most innovative platformers of 2008, putting players into a dream world of knit heroes and cardboard props. Aside from the single player game, LBP offers players a rich level creation system, downloadable content, and a multiplayer online network for sharing user-generated content.

Developer Media Molecule’s Kenny Young was tasked with tackling the game’s audio. I asked him to talk me through the tech, trials, and triumphs of bringing audio to LITTLEBIGPLANET.

JESSE HARLIN: LBP is equal parts sandbox game, side scrolling platformer, and multiplayer party game. Can you start with a bit of a discussion about your creative vision for the game’s audio?

KENNY YOUNG: A bit of a Jekyll and Hyde project! The requirements for the audio in play mode were relatively easy to establish—that thought process was very much like traditional game development where you dictate the player’s experience. Establishing how a creator will control all of these elements when building their own level in create mode was where the head scratching came in.

It was clear that in order to make the audio features fun and accessible we couldn’t encumber creators with having to specify and control every aspect of the audio. Taken to the other extreme, we obviously couldn’t handle all the audio automatically because that’s getting in to mind-reading sci-fi territory, not to mention taking away all the fun. The trick was finding a balance between the two. 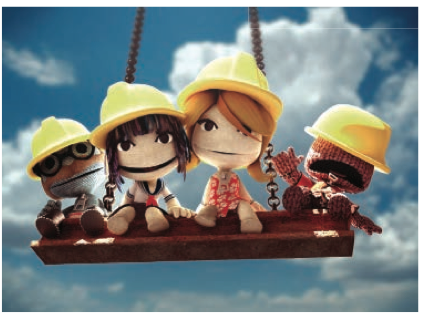 What helped me find that balance was categorizing the audio into “real sounds” and “imaginary sounds.” Real sounds, such as the physics audio, HUD, character and gameplay sounds—are automatically handled by the game. Imaginary sounds are those unknowns which the creator inserts to bring their level to life or influence a player’s experience. That’s where the sound and music objects (built-in audio tools) come in to play.

In terms of my aesthetic vision for LBP’s audio, I took my lead from the game’s distinctive style; I guess you could say the game defined its own audio requirements and I just did what Sack Boy told me.

JH: The intro logos show that you used FMOD. Can you talk some about that decision?

KY: We’re a small team at Media Molecule (30 of us) and writing our own “next gen” audio tech from scratch would have unnecessarily strained our resources. I’d previously worked for Sony so I was a ninja SCREAM user, and I loved its granular scripting system; but when I was making these decisions back in 2007, the PS3 version was lacking some features I wanted. At that time, Wwise was unproven as far as I was concerned so going with FMOD was an easy decision.

Although not unique to FMOD, I hadn’t had the luxury of abundant real-time parameter controls before—those totally rocked my world and I used them on just about everything. Manipulating sounds to adapt them to the changing context in the game is an indispensable necessity, especially when the raison d’être of your game is for players to mess around with everything. FMOD made that very easy to set up.

JH: One of the more charming elements of the level creation tools was the ability for players to remix the interactive music as they saw fit. Did this feature offer any challenges as you added it into your tool set? Did composers simply deliver stems to you that you then looped and integrated?

KY: The tech is very simple—it’s just a couple of multichannel files locked together to give us our six parallel stereo pairs. You could do this using FMOD’s event system, or you could just grab the files straight out of a soundbank and manipulate them directly as we did.

When technical director Alex Evans suggested a simple multi-stemmed loop with no transitions or any other sexy interactive music stuff, I was skeptical, but came around to the idea. From there I devised the conceptof the music object and its functionality.

Despite the simplicity of the design, it’s still quite an abstract concept for people to get their heads around. I’ve noticed that our users easily get the notion of setting the mix to make the music sound the way they want, but then when their level progresses, rather than change the mix the majority of them opt to change the track! That is most certainly their call, and catered for by the tech, but it’s fascinating to see something you’ve designed out in the wild being used and, often more interestingly, abused.

Initially, I was quite hands-on with composer Mat Clark’s stems. He’s very experienced but hadn’t written any interactive music previously and needed guidance on the “gotchas” inherent in having the music’s intensity and mix change in real-time. So some of the tracks were a true collaboration, but I eventually moved to acting more as arranger and producer once Mat had found his feet.
The interactive tracks are great, with the improvisational performances by the instrumentalists brought in by Mat being a highlight for me.

JH: The level creation tools are a massive part of LBP’s charm, at once easy to use and extremely deep. How similar are the in-game tools to your actual development tools?

KY: The in-game tools are the development tools! I add music to levels using the music objects, and I add spot sounds using the sound objects. The line is drawn when I have to set up all the tools so that they work as desired in-game—I need to set the relative levels, fade time and surround send for each music stem, and I need to specify the fall- off and other parameters for each sound effect in a sound object. Then, of course, there are all those automatically handled sounds which the user doesn’t need to worry about—those are implemented by a programmer or by myself using our proprietary scripting system.

JH: How did the addition of DLC for LBP affect the design of your audio tech
or content?

KY: Basically this meant making sure we had a system in place for patching in new content, and I was always conscious of trying not to shoot ourselves in the foot.

For example, let’s assume that we were able to squeeze all of the game’s 1200- odd sounds in to memory. Great, but where’s the space for the DLC sounds? The real issue here is that it is the player who unwittingly defines the amount of sound in a level, not the audio designer. This isn’t a new problem per se—games featuring open worlds have to deal with this same issue. But an open world is a defined, known entity which you can work around, whereas a user-created LBP level is a big unknown. Our solution was to create a culling system which kicks out old sounds when we are running out of RAM. This way, our paltry 16MB sound budget can handle our 40MB main bank of sounds plus as much DLC as we can throw at it.

JH: Stephen Fry’s voiceover work gives the game a storybook quality that is both unexpected and fitting. Can you talk some about the choice to use him and if this storybook take was something he brought to the game or your choice of direction?

KY: We identified the need for tutorials to help explain the basics of the game, as well as the ins and outs of create mode, relatively late in development. But Stephen Fry’s name was being thrown about from the start of that process. 1970s British kids TV shows were a reference point for the project, evident in the hand-crafted, worn visual style and the eclectic “2nd hand shop bin” soundtrack. It was clear we wanted a warm, friendly, British granddad-like story-telling voice. Getting Stephen interested in the project wasn’t difficult, but finding a couple of hours where the man is free to come in to a recording studio is damned near impossible, so it very nearly didn’t happen. But we’re very grateful that it did.

My main concern was how the narrator’s disembodied voice was going to be introduced to the player. Motion graphics artist Rex Crowle didn’t originally conceive his intro as having any voiceover, which would’ve left us with this voice coming at you out of nowhere and could have felt rather sinister. Fortunately, Stephen’s voiceover gelled with Rex’s visuals and composer Daniel Pemberton’s music perfectly, and the intro video acts as a wonderful, disarming introduction to the narrator character and, of course, the game as a whole.

JH: Is there anything you weren’t able to do in LBP that you’d love to do in a sequel?
KY: We don’t need a sequel to add cool new stuff, and that’s what we’re all working on right now. I was able to squeeze in just about every idea on my wish list into v1.0 of the game, (including the squeaky right-stick on the pod computer!). The only things missing which I really wanted were a satisfying “dong” when you slap someone whilst equipped with the frying pan (it’s in the soundbank waiting to rock!), and the ability to listen to your own music library whilst in create mode. Sure, there were also those bluesky ideas that were never a serious consideration given the initial time frame of the project, but there’s no reason why we can’t resurrect those now and use them to help grow the LITTLEBIGPLANET experience and its community.