Apple Inc.’s iPhone has shaken up the cellphone business. Its next target: Nintendo Co. and Sony Corp.

The iPhone and its sister device the iPod touch, which feature big screens and powerful graphics, are emerging as serious competitors to Nintendo’s DS handheld and Sony’s PlayStation Portable.

Apple Inc.’s iPhone has shaken up the cellphone business. Its next target: Nintendo Co. and Sony Corp.

The iPhone and its sister device the iPod touch, which feature big screens and powerful graphics, are emerging as serious competitors to Nintendo’s DS handheld and Sony’s PlayStation Portable. 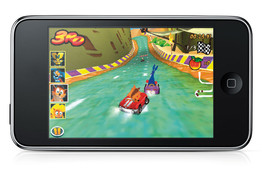 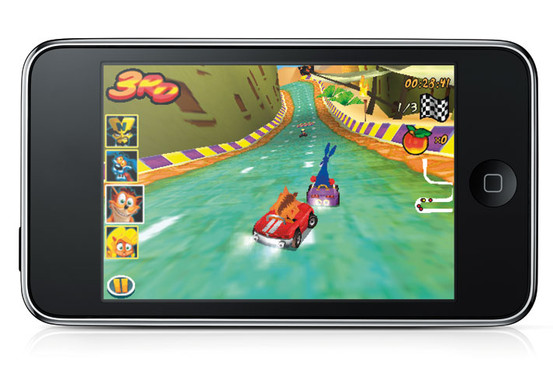 Established game publishers such as Sega Corp. and Id Software Inc. are devoting more resources to Apple’s devices while start-ups dedicated to making iPhone games have sprung up. Already, there are nearly 2,000 iPhone games available.

Developers are being lured by Apple’s online method for delivering games, which has lowered distribution costs and made it possible to profit on games that sell for just a few dollars or are given away with advertising.

Apple keeps 30% of the proceeds of software sales through its App Store clearinghouse. But even with that split, "games sold via the App Store are the most profitable in terms of any of the formats we work on," said Simon Jeffery, the U.S. president of Sega.

Sega has sold more than 500,000 copies of a $10 game called "Super Monkey Ball" for the iPhone and iPod touch. The game, in which a player navigates a rolling orb around mazes by tilting the device, has reached a sales level that Sega says would be considered a hit for a DS or PSP game, which can cost up to $40.

"It feels to me like there’s a real threat to their [Sony’s and Nintendo’s] business from the iPhone," said Neil Young, a longtime executive at games publisher Electronic Arts Inc. Mr. Young quit EA this year to form a start-up, Ngmoco Inc., dedicated to publishing iPhone and iPod touch games.

Apple, which has sold more than 13 million iPhones so far, has attacked the mobile games market in recent months by wooing game-industry executives, hosting technical meetings with game developers and touting games in a new iPod touch commercial.

"I think the iPhone and iPod touch may emerge as really viable devices in the mobile games market this holiday season," said Steve Jobs, Apple’s chief executive and co-founder, in an interview.

As WSJ’s Nick Wingfield reports, Apple has become an even bigger player in entertainment as it takes on gaming heavyweights Nintendo and Sony. (Nov. 11)

Of the more than 200 million copies of programs that have been downloaded through the App Store, Mr. Jobs said about a quarter were games. Most of these downloads are free software that Apple hopes will feed demand for its devices.

Even before Apple moved into games, Nintendo saw itself competing with them, said Reggie Fils-Aime, president and chief operating officer of Nintendo’s U.S. division. "Whether you chose to play on your DS or listen to music on your iPod, we’re already in the same competitive space for time," Mr. Fils-Aime said.

Sony doesn’t consider Apple as big a threat because gaming is secondary to its devices, said John Koller, director of hardware marketing for Sony’s PSP. "The consumer is using the mobile gaming on the iPhone and iPod Touch as a time waster," he said.

Still, some game developers are choosing Apple over Nintendo or Sony because there are no pricey game cartridges to manufacture for the iPhone and there is no need for a retail distribution network.

"The barriers to entry are such that anyone with a great idea can efficiently bring them to market," said Bart Decrem, a Silicon Valley executive who formed a company called Tapulous Inc. to make iPhone games earlier this year.

So far, Mr. Decrem has had more than 2.5 million downloads of a free music game called "Tap Tap Revenge," where players tap and shake their devices to the beat of popular tunes.

Now the Palo Alto, Calif., firm is selling ads in the game to sponsors such as car maker Jaguar and Comedy Central. It has also released a $4.99 version featuring the rock band Nine Inch Nails. The company declined to discuss its revenue.

For people like John Sims, a bank teller in Denver, the iPhone is winning out over dedicated portable game players. Though he concedes the Sony and Nintendo devices provide better quality games, most iPhone games cost far less. Plus, he prefers to carry only one device.

"I can listen to my iPod and play games at the same time, and when I’m done I can just put it in my pocket," said the 20-year-old, who sold his PSP and may get rid of his DS soon. "The short amount of time I’ve had the iPhone, I’ve played more games on that than on my PSP and DS combined."

Apple is going after the mobile games market just as it could use a new type of entertainment to stimulate growth for its portable devices. The Cupertino, Calif., company may be close to saturating the market for people who buy iPods for music and video, some analysts believe. Revenue from iPods grew only 3% in the most recently reported quarter.

The iPhone and iPod touch offer more powerful technology for games than standard cellphones and, in some respects, the Sony and Nintendo handhelds, say game makers.

The Apple devices have big screens, beefy graphics processors and well-designed software tools for creating games. They also boast a feature called an accelerometer, which senses how a user is holding the device and gives consumers the ability to, say, steer in a racing game like Activision Blizzard Inc.’s Crash Bandicoot Nitro Kart 3D by tilting the gadget.

Apple’s devices, however, lack physical buttons, which is a key limitation, said John Carmack, the game designer at Id Software Inc. responsible for pioneering shooting titles like Doom and Quake.

The lack of tactile feedback means players’ thumbs tend to drift off on-screen controls during game play, making them less effective, he said.

Despite his misgivings, Mr. Carmack said even Id is developing two iPhone games. "I don’t expect them to displace DSs and PSPs," he said. "I think they will be a fairly robust market all by themselves."