This month we spoke to the G.A.N.G. Scholars chosen to attend GameSoundCon in 2016. The G.A.N.G. Scholars Program provides select highly motivated and high-achieving full-time music and sound design or audio programming students who have a passion for interactive audio with free all-access event passes to professional conferences in the video game or audio industries. The scholars are also assigned an industry mentor from the G.A.N.G. Advisory Board or Board of Directors.

Alejandro Loaeza Salcido: My name is Alejandro Loaeza Salcido and I am an undergraduate student majoring in Commercial Music at the University of Texas at El Paso, graduating in May 2017. I am also a Mexican National born in Torreon, Coahuila, Mexico. As a senior in college studying music with piano as my main instrument, I have collaborated with student projects to implement music into games in Unity by using FMOD and have written various arrangements of videogame music for piano and other instruments. My future goals include getting better at my craft of composing music by working on projects, meet new people and keep spreading the love for game music.

Rob Brown: I’m Rob and I’m in my final year of Sound Design studying in Edinburgh, UK. I work freelance as a game audio sound designer and I’ve worked in a few indie projects. My future goals are to get my Masters in Sound Design, continue my research into VR audio and to work on some very cool games.

Jesse Hartov: At Berklee I study Film Scoring and Electronic Production & Design with a minor in Video Game Scoring. I've worked mostly on student game projects thus far. Generally, my short-term goal is to work for a scoring company and/or as an assistant to a composer, and my long-term goal is to be a freelance composer full-time.

Kyle Guffey: I'm a senior at the University of Miami's Frost School of Music studying Commercial Composition and Production. I play trombone and started writing songs when I was 13, but over the course of my studies have developed a passion for producing and arranging. My goals are to write and produce music for media, specifically ads and games.

What made you apply for G.A.N.G. Scholars?

Alejandro Loaeza Salcido: I first heard about G.A.N.G. and GameSoundCon at MAGFest 2016, my first videogame related trip. I was attending a networking panel with revered people from the industry like Alexander Brandon, Bonnie Bogovich and Sebastian Wolff, among others. I looked into the organization and became a student member, but I also looked into GSC. The prospect of me attending was daunting given how different and professional it seemed compared to MAGFest, but I took a gander and applied with the help of a faculty mentor once I heard about their Scholars program. I was humbled to have been selected and I am now extremely thankful I applied.

Rob Brown: I applied to the G.A.N.G Scholars programme as I was looking for support in my progress towards becoming a successful game audio sound designer. Without the scholarship, I would have never been able to attend GameSoundCon and would have missed out on the connections made and the massive amount of knowledge shared there.

Nickolas Forsten:  My first time at Game Sound Con was a great experience (last year). This year I was planning on going to AES and AVAR in Los Angeles with my AES chapter, and wouldn't be able to afford to attend Game Sound Con as well, which I was also very interested in when I learned they had added the VR and Research track, I was hoping to flesh out a pool of research ideas for my undergraduate senior project. When I saw Chance Thomas' tweet about the Scholars Program, I decided to give it a shot.

Jesse Hartov: My video game scoring professor, Michael Sweet, encourages his students to apply for the G.A.N.G. Scholarship so they can attend GDC or GSC. A friend of mine who previously won the scholarship highly recommended it and encouraged me to apply as well. I was very excited about the opportunity to attend GSC and have an industry mentor. In addition, I attended my first GDC and G.A.N.G. Awards this past spring, and was interested in getting more involved in the game audio community.

Kyle Guffey: My program adviser posted the G.A.N.G. application in our major Facebook page. It was over the summer and I think I was the only one paying attention to it. I'd only barely gotten into games and figured I should take every opportunity I could get. I was working for a company that makes music for ads in New York and submitted my latest project for GameSoundCon. I’ve thought about composing for games for a long time and really wanted to come to the conference, but I sent the application and forgot about it because I figured the work I sent wasn’t enough.

Who was your industry mentor and what advice did they give you? 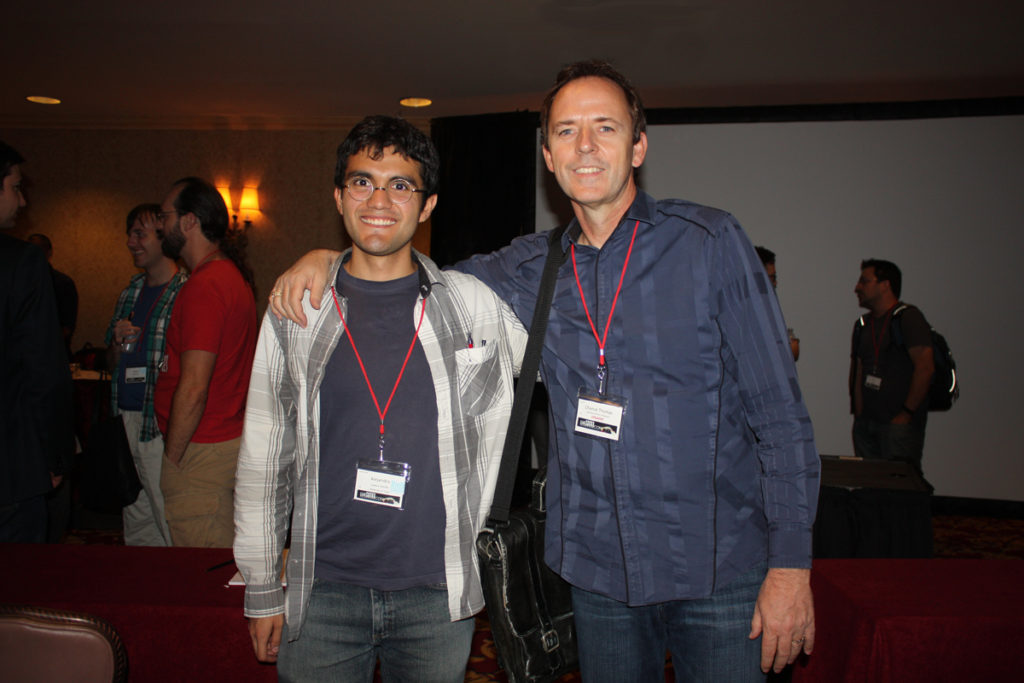 Alejandro Loaeza Salcido: My industry mentor at GSC was Chance Thomas. I had a chance to meet with Mr. Thomas several times throughout the conference to ask him questions. To be honest, though, it was until the second day when I asked him several questions because I was still in shock I was among so many talented people from the industry. Mr. Thomas was very nice to me and everyone he came across, which really helped me feel like I was welcome. He suggested I look into graduate school if that is what I wished to do, but he also suggested I open up a videogame music student club in my school and collaborate as much as possible in student projects happening in my university. Thanks to his advice I am already planning my first talk to the group about game audio for students and faculty.

Rob Brown:  My mentor was game audio composer Tom Salta. Even though we don’t work in the exact same field, Tom was a wealth of knowledge. He shared his experiences in the industry and advised me on how to focus on building relationships rather than ‘clients’. I feel networking is one of my weak points and Tom went a long way in helping me fix that.

Nickolas Forsten: Richard Ludlow was my industry mentor, Instead of specific advice, I was able to pick his brain about what he does: the most fun as well as the most difficult aspects of his jobs, and about his experience doing VR titles.

Kyle Guffey: Penka Kouneva was my mentor. She gave me a lot of advice and made sure to spend a lot of time with me despite having slept a grand total of about 4 hours throughout the conference. Be prepared, don’t burn bridges, and be accommodating was a good one. It’s a cliche to say, “Don’t give up and stick with it,” but I think it applies really well in games or sound for media in general. If you stick around long enough and work long enough, you’ll be one of the few who do and you’ll have built relationships and gotten better in the process.

What was a highlight of your experience?

Alejandro Loaeza Salcido: The highlight of my experience was definitely the night of the first day at the Gold room. I felt I was home somehow while being a total stranger. I met several people that night while tagging along with someone else. I approached several people, but I was mostly appreciating the moment of being around people that understood and were passionate about game sound. It felt like a family. That for me was the event that left the most lasting impression on me.

Rob Brown:  Everything was so good it’s really hard to pick a highlight. I think just being given the opportunity to involve myself, face-to-face, with such a knowledgeable and welcoming group of people was the greatest part of the trip. That’s on top of all the insightful talks and discussions from which I learned so much!

Nickolas Forsten: The highlight of the experience was being around people just as passionate about Game sound and music as I am.

Jesse Hartov: I really enjoyed learning about techniques I've never attempted before, such as runtime sound design (Jaclyn Shumate's talk) and precognitive music systems (Paul Lipson's talk). I'm excited to experiment with these ideas and share them with the game audio community at Berklee. I also met many new faces in game audio and look forward to speaking more with those people, students and professionals alike.

Kyle Guffey: The highlight of my experience was meeting new people. I thought the classes were excellent and informative and inspirational, but then having conversations about it was even better. I think while it was exciting to go more in depth on middleware and technology and composition and work/life balance, there were certainly points at which I thought to myself, “Okay, so Kyle I have this great plan. Don’t sleep. We’re going to just learn everything and get really into micronaps…” and then you walk out of the class, start talking to people, and realize nothing happens all at once, no one has a set plan, and people actually want to know about you. It was good talking to peers getting into the industry because we were all in awe of each other while sympathetic to that overwhelmed feeling. It was awesome talking to the mentors and professionals because, well first, how cool are they, but they don’t seem to have forgotten what starting out feels like. They’d talk specifically about when they began in games and what’s worked in their day to day.

Any final comments about the G.A.N.G. Scholars program?

Alejandro Loaeza Salcido: As I said before, I am extremely honored to have been selected to attend this past GSC 2016. I still cannot believe it has been over for a couple of weeks. I hope that in the future the G.A.N.G. Scholars program continues to provide people like me the chance to attend events like these based on one's merits. I think that for me and the other scholars this year, this opportunity was a great chance to meet new people and to learn as much as possible to become better composers and individuals. I know I have at least fifteen pages worth of notes from the conference. I am just thankful I got to be involved in one way or another in such a welcoming environment.

Nickolas Forsten: I feel very fortunate for the opportunity to go to Game Sound Con, which G.A.N.G. made possible for me. It was an honor to be selected as I'm sure there were many wonderful applicants. Thank you for a fun and educational experience!

Jesse Hartov: G.A.N.G. Scholars is a fantastic program, and I plan on encouraging friends to apply, just as others have encouraged me.

Kyle Guffey: Really cool opportunity. I’m so glad I got to be a part of it and definitely think having the mentors part of the conference was awesome.

Rob Brown: My final comment would be to any students considering an application for the next year: do it! You won’t regret it. I met so many fantastic people and learned so much that I cannot recommend it highly enough.