In this interview with Jesse Harlin, we talk about creative trust, community collaboration, and quirky expression through his latest soundtrack release for ‘Yoku’s Island Express’!

EL: Tell me a little about your beginnings and how your 20 years of learning have led to this very score. 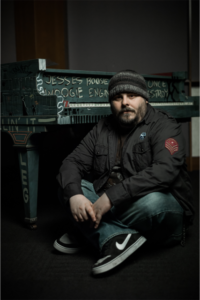 JH: I started out my musical life playing in bands and spending hours at a time listening to CDs, dissecting their production work, analyzing the songwriting techniques. Eventually in college, I started studying film scoring which – when combined with my lifelong love of gaming – led very naturally to game scoring. After college and grad school, I landed the job of staff Composer at LucasArts and was there for 10 years.

While at LucasArts, I had the good fortune to work with Villa Gorilla’s Jens Anderson. We worked together on a game called Caveland. Jens was a big fan of the score and so, when he started his own indie studio and I went freelance, he reached out to me about scoring their first game.

EL: What were your initial thoughts when you were told about Yoku’s Island Express’ core mechanics and gameplay? How did this impact your approach on the music?

JH: I had no idea what to make of the game from just the description Villa Gorilla gave me. “It’s a 2D, side-scrolling open world pinball game where you play as the ball on a tropical island with a Cthulu-esque elder god problem.” There’s so much in there to try and unpack and it seems to go in a radically different direction with each new adjective. Amazingly, the entire concept not only makes sense within about five minutes of sitting down and playing it, but you actually find yourself wondering why no one else made this game before. It seems so natural.

At its core, it’s a game about mashing two very different genres together: pinball and Metroidvanias. Villa Gorilla took two genres that don’t exactly sound like they’d work together, smushed them into the same space, and discovered that they work beautifully in concert. As a primary design goal for the music, I knew I needed to do the same thing: mash together disparate genres and make them work seamlessly.

EL: What restrictions or confinements did you have when working on Yoku’s Island Express? Or were you given total creative freedom, and if so, what led you to make limitless choices?

JH: Zero. I had zero limitations placed on my creativity by Villa Gorilla. Strangely, I initially found it more difficult to work when I had complete creative freedom than when I had a rigid roadmap as on previous projects. When you can choose from every possible approach for a score, where do you begin to look for inspiration? You can spend hours wasting away chasing down ideas, brainstorming, and auditioning sample patches.

Eventually I decided to narrow the focus to that which first inspired me to become a composer: all of those albums that I’d studied and dissected in my youth. I looked back to electronic music pioneers like Tangerine Dream and Vangelis, to progressive rock bands like Yes, Pink Floyd, and Rush, to the chiptune sounds that had accompanied my early gaming days, and a myriad of other influences. The final score has everything from a folk stomp to trip hop, from minor reggae and turntablism to hip-hop tablas. 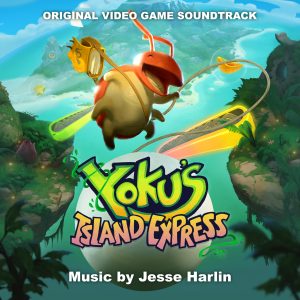 EL: You’ve got quite the mashup of music styles for this soundtrack, going from beat boxing to bebop, medieval madrigals to chiptune basslines, and so on! Can you take me through the decision process in which you chose to go with so many varying genres of music for this one game?

JH: The landscapes of “Yoku’s Island Express” change dramatically as you explore Mokumana Island. You start out on a tropical beach and end up exploring everything from caves and subterranean temples to an ancient lighthouse atop snowy peaks. I knew that the game was going to need an almost throwback approach to the music the way classic NES games had “world music” for different environments. I thought about the game as compartmentalized into areas each with their own inspirations and emotional goals. The tropical beach needed to feel like a vacation, while the subterranean ruins needed to feel lonely and plaintive.

Eventually I just got into a rhythm of trying to make sure that the music was jumping around into dramatic changes. “Flight of the Space Monks” is a track on the soundtrack that combines Tuvan throat singing with the sound of 1980s science class instructional filmstrips, chiptunes, Brazilian berimbau, and the DNA sequence of yeast spoken through a vocoder. It became a game almost to see if there was a line in the sand past which Villa Gorilla would say “Okay, now you’ve gone too far.” But they never did, and I was allowed to experiment as much as I wanted.

EL: There are a handful of live musicians performing on this soundtrack. Do you mind sharing how these collaborators came into the picture?

JH: The game was a small budget indie title. As such, I knew that I was going to need some live players to help me sell the score’s believeability as most of it was going to be done with samples. At the time I was starting out working on the game, I’d gotten in touch with the Materia Collective, a game music fan community that routinely produces cover albums of game scores. They were doing a Final Fantasy X cover album and I was hoping to be able to contribute to it, as Final Fantasy X is one of my favorite games. I got too busy and wasn’t able to actually take part in the album, but I was impressed by the caliber of musicianship I was seeing from these young musicians. Not only were they gifted instrumentalists, but they seemed to play a surprisingly diverse array of instruments. When it came time to try and track down ocarina, ukulele, and harmonica players for the score, the Materia Collective instantly jumped to mind. I was also able to find 12 vocalists to help me perform the choral arrangement on “Yoku Taidua,” the game’s main theme.

EL: How do you think groups like Materia Collective may be resourceful for composers and their scores?

JH: Game cover organizations like Overclocked Remix and Materia Collective are full of musicians who love games. They’re often young, just starting out in their own careers, and are thrilled to be asked to take part in the scoring of an actual game. As such, their enthusiasm is off the charts when it comes to getting them excited about working on your score. And as I mentioned before, these are organizations from all over the world, so the diversity of instrumentation available to you as a composer is exceptionally deep. I really can’t recommend highly enough tapping into these resources.

EL: Do you have any additional advice or tips when reaching out to collaborators online?

JH: Just make sure you’re polite. In everything you do, be polite. Online, meatspace, doesn’t matter – just don’t be a jerk to people. Not only will they want to work with you, but they’ll express to other people how nice you are to work with. You’ll get a reputation for being a team player, a pleasant person, maybe even a reputation for being more creative and talented than you actually are. Stranger things have happened. But the point is, this is a small industry and people talk. If you’re a jerk to collaborators or clients, no one is going to want to work with you, regardless of how talented you might be.

You can find the ‘Yoku’s Island Express’ OST digitally through Sumthing Else Music Works: https://www.sumthing.com/p/yokus-island-express/