WHEN I WAS IN SCHOOL STUDYING film scoring, the composers had weekly recording sessions. Every week, 30 composers would get fifteen minutes each at the conductor’s podium to record the cue they’d written for one of three film clips. In order to streamline the sessions, the teachers made us all write using the same pre-determined list of instruments. Each week the list of instruments would change, but the number always remained the same: only twelve instruments.

Limiting the orchestral palette to only twelve instruments meant that familiar crutches such as lush string lines, armies of percussionists and choirs weren’t available to lean on for easy support. Instead, we had to learn how to make a bass clarinet, two cellos, an alto flute, and a cuica feel just as dramatic as if we had the London Symphony Orchestra at our disposal. The results were always fascinating cues that bucked convention, shied away from clichés, and mixed dramatic storytelling with a signature sound.

As 2009 wanes, our industry is feeling the constrictions of the global recession. Studios are closing, layoffs abound, and everyone is being asked to do more with less. Add to that the explosion of the casual and independent game markets—either via Flash games or the iPhone’s App store—and it’s clear that budgets are shrinking rather than growing. But shrinking budgets can be the perfect catalyst to shake off some tired game music clichés and start exploring the possibilities allowed by limiting your palette.

GOOD COMPANY
» Placing boundaries on a composer’s instrumental palette is nothing new. Bernard Herrmann’s score for Psycho is one of the most famous film scores of all time and consists solely of an orchestral string section. The score for Jim Jarmusch’s western Dead Man is comprised almost exclusively of nothing more than solo guitar improvisations performed by Neil Young. Thomas Newman’s score to AMERICAN BEAUTY sparked a marimba fad in film, TV, and commercial scoring when it was released in 1999.

Games, unfortunately, have been slow to follow suit with limited palettes. Too often, composers simply take a limited budget to mean a turn toward vast arrays of samples rather than vast ensembles of live players. Hideki Sakamoto’s captivating string quartet score to ECHOCHROME is a standout exception, as is the recent score for Sucker Punch’s INFAMOUS. With INFAMOUS, Sony’s music crew centered the score on the creation of junkyard instruments—everything from bungee cord plucks to windshield percussion—that were sampled and then handed to electronica artist Amon Tobin who translated the unique textures into in-game compositions. The result is a signature score that is heavy with industrial grit and exotic without being ethnic.

A CASE IN POINT 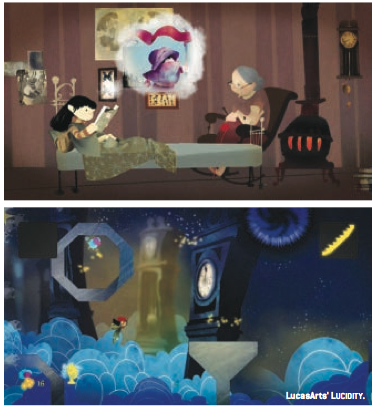 » This past May, I had the opportunity to write the score for LucasArts’ LUCIDITY. Since it’s set in a 10 year-old girl’s imaginary dream world, I decided the score should change from track to track with the disjointed shifts that often accompany sleep. Snippets of jazz, old foreign folk lullabies, and a hodge-podge of classical influences served as my building blocks. However, in order to reign in my budget and my time so as to fall in line with the scope of the project, I set a basic guideline at the very outset of composition: each track would contain only twelve instruments.

For each track, I changed my twelve instruments of choice. Sometimes I defined an “instrument” as its real life counterpart while other times I defined “instrument” as a particular sample patch. As such, sometimes one instrument on my list might contain five different sample patches of different articulations while other times a drum kit simply counted as one instrument. The idea was to set boundaries that were malleable to a given track’s needs, rather than inflexibly penning myself in with needless limitations.

What resulted was a broad expansion of my creativity. I found myself writing for solo music box. I discovered the joys of instrument pairings that I might not had previously tried, such as low harp plucks with a saxophone quartet or doubling a melody line with toy piano and harpsichord. Time after time, I found myself habitually reaching for a new instrument track before stopping, rethinking, and then tackling the problem by searching for a new perspective in my existing sound set.

The ability to call upon countless sample instruments on a whim and a false expectation that bigger games necessitate full orchestras have both turned many game scores into bloated expanses of homogenous timbres. With the ever-present drive among development teams to create instantly identifiable gameplay mechanics and visual styles, we as composers owe it to the teams’ visions to strive for an equal amount of individuality. By limiting their palettes, game composers will find a greater diversity of sound and move away from familiar habits toward the inevitable creation of signature scores.