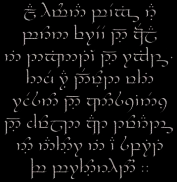 The first article of the Universal Declaration of Human Rights as rendered in J.R.R. Tolkien’s invented Tengwar script.

CAVE AB HOMINE UNIUS LIBRI IS A LATIN proverb that means “beware a man with only one book,” and when sitting down to write choral music for entertainment media, it’s the Latin texts that composers usually reach for first. Rather than crafting meaningful text, many pieces of choral music for games or movie trailers contain a hodge-podge of random words or disconnected phrases. For the most part, this seems to be due to tight deadlines, a Latin-illiterate audience, and a general sense that sounding like “Carmina Burana” will automatically result in an epic score.

This approach does a huge disservice to a choral score. The human voice is the most emotive of all instruments, as well as one of the most dynamic in term of timbre and range. Most importantly, the human voice is the only instrument that can communicate to the listening audience through the poetry of the written word. Setting meaningful text to your music adds an emotional impact unachievable with any other instrument and holds the potential to captivate listeners and pull them deeper within the game world.

Latin may have been the original choral language at the birth of Western music, but it has been turned away from more and more since the late 15th century. Hundreds of thousands of choral texts exist in the classical romance languages of French, Italian, and Spanish as well as German, English, and more unfamiliar texts in Chinese, Thai, Russian, and any other language with a cultural folk song tradition. Since choral music has the ability to comment on drama in a way very much akin to the Chorus of traditional Greek theater, the first step when deciding to write choral music should not be which existing piece of classical repertoire to ape, but to think about what the choir can dramatically represent that makes it powerfully unique to your work.

Rather than simply sounding epic in a generic sense, a choir can add to the music by tying the characters together with the plot and setting. Consider where the game takes place. Latin text is considerably less appropriate for a World War II first-person shooter than would be Wagnerian German. Swords and sorcery fantasy games are almost always imbued with an Arthurian sense of early Anglo-Saxon mystique. Rather than using the crutch of clichéd Latin, choral work in Gaelic or the Old English of Beowulf lends a noble fluidity to the sound while infusing it with an exotic unfamiliarity.

As a means of rooting the main character into the early-Christian world of ASSASSIN’S CREED, Jesper Kyd decided to select from multiple sources for his choral text making use of not only Gregorian chant, but also Muslim prayers. Perhaps the most famous use of non-Latin text in game scoring, both GOD OF WAR I and II employed bold choral arrangements in Greek in order to cement Kratos in the world of ancient Mediterranean mythology.

The Internet is a fantastic resource for quickly tracking down thousands of public domain texts in hundreds of languages. ChoralNet.org is a site where composers can find a wide array of choral texts in Hungarian, Hebrew, Swedish, Spanish, and Italian to name a few. The oddly-named Robokopp (www. musicanet.org/robokopp) is an online resource of thousands of traditional folk songs from German drinking songs to French sea shanties and Welsh hymns.

The Internet is also an excellent resource for finding professional translators in every language imaginable, an invaluable resource for composers when writing their own lyrics or deciding to set text or poetry in a non-native tongue.

Whether it’s the Pussycat Dolls performing in Simlish, the ancient Mando’a of STAR WARS: REPUBLIC COMMANDO, or the vocalizations of K.K. Slider in ANIMAL CROSSING, games have a rich history of utilizing vocal music in constructed languages as well. A constructed language is any language that has been artificially built, such as Klingon, Tolkien’s Elven languages, or Esperanto. If your game is set in a completely alien world with completely alien inhabitants, a little extra time and care can result in a captivating new choral language unique to your new world. Diehard fans will devour the content and it will help to sell the realism of a fabricated world. When constructing your own language, if it will be used in music, remember that the most important aspect is its ability to be sung, so practice singing the words out-loud in order to test their ease of pronunciation. Additionally, whatever spelling you may concoct for the official look of the written words, it’s best to write the language into the vocal score in easily-understood phonetic spellings, as anything else will simply waste time on the scoring stage. For more information than you could possibly ever want about creating your own language, you can find noted conlanger Mark Rosenfelder‘s language construction kit online at www.zompist. com/kit.html.

Even the world of synthesized choirs is expanding beyond Latin. When the next version of EastWest/Quantum Leap’s popular Symphonic Choir library ships later this year, the preconstructed WordBuilder tool will contain new ready- made phrases in English, Italian, Russian, German, and even Elven.