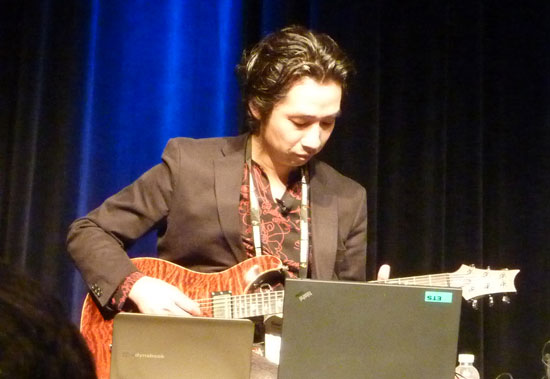 This year’s GDC felt much smaller than previous years. Gone was the
four story behemoth that is west hall, and everything was instead
crammed into the Moscone Convention Center’s north and south halls. The
audio track in particular took place in one of two rooms, both in north
hall, which were often much too small, which led to sessions filling up
and people being left out in the hallway without the chance to hear
several panels (the Flower panel in particular was so popular
that people lined up outside the room despite it filling up just to meet
Vincent Diamante after his hour talk).

So, what were the sights and sounds from north hall? We checked out a
number of panels, and rather than post about each one individually, I
thought it would be more manageable for you guys if I simply gave a
brief summary of each panel that we attended and focused on highlights
from the session. There were definitely a lot of surprises, and even
some information revealed about the composer of Metroid: Other M
from a non-audio track session!

Hit the jump to check out our coverage.

As Long as the Audio is Fun, The Game Will be Too
Akira Yamaoka (Grasshopper Manufacture)

Yamaoka
gave a very technical presentation that was less about fun, and more
about how certain techniques used in writing and implementing music can
impact players. He started with (a much too long) history lesson of
Japan to give the audience an idea of who he was and where he was coming
from, then went into the physiology of human hearing and how it differs
from vision. He then launched into his own philosophy on sound design.
He noted that triggering a sound effect before the action takes place
on the screen causes fear or anxiety, while triggering sounds after the
action takes place generates a feeling of comfort. He also gave a
demonstration of how gaps of silence are oftentimes filled in by the
brain, and played a clip of “Fur Elise” with brief pauses between notes,
and contrasted it with a version where he inserted static between the
notes, creating a much more distinct and even startling sound. It was
very interesting, even if it wasn’t about fun in particular. Yamaoka
ended by playing a new song he wrote on guitar for a couple of minutes,
and leaving us with one of his favorite quotes, “God is in the detail of
the arts.”

AVATAR: The Game: The
Soundtrack: The Postmortem. Even if you are as uninterested in AVATAR:
The Game as I am, this was still the best panel of the year.
Chance Thomas not only proved himself to be an amazing public speaker,
controlling the pace of the session and driving audience participation,
but he’s also somebody who really cares about helping the next
generation of composers get on their feet. Some interesting bits: the
game featured 267 minutes of music that had to be written in 70 days.
He worked about 108 hours per week during this time. He discussed at
length how he got the gig, and how he was originally selected as a part
of a team of composers, but wrote a letter explaining why he thought he
should score the game single-handedly (“Be bold,” he commented). He
talked about the game’s interactive music system and also joked about
the fact that after working in James Horner’s theme from the movie into
the game, he got a call from the developers asking where the melody came
from, and insisted he remove it from the game because they didn’t like
it. Last thing: Seattle string players aren’t very friendly.

Where it All Began: Lessons That Can Be Learned From ‘First
Generation’ Music
Rod Abernethy, Alexander Brandon, Brian Schmidt, Brad Fuller, Tommy
Tallarico

This is one of the panels I was most excited about. How did it come
to be? Well, Rod Abernethy recently scored Eat.Lead, which
required an 8-bit theme, so he really got into the style and wanted to
talk about it at GDC. The panel opened with a video post_date by
Alexander Brandon featuring 8-bit games and their updated counterparts,
showing the original source and inspiration for these modern
re-imaginings in terms of visual and musical direction. The talk itself
focused on each panelist’s remembrances of oldschool game audio, and
what lessons they came away with from the experience.

Alexander Brandon talked about writing with a tool that was developed
by Factor 5 and Chris Huelsbeck that I thought was cool, and Brad
Fuller talked about his experiences programming music during the coin-op
era, which was a rare insight into just what writing music on those
platforms entailed. Tommy discussed a system his programmers made that
allowed him to plug a MIDI keyboard directly into the sound chip on the
NES in order to write music, and Brian Schmidt recalled making errors
when programming notes and coming up with awesome stuff by accident,
which got a chuckle from the crowd. As far as lessons, everyone agreed
on the importance of melody and developing a hook, and noted that an
orchestra is not always the answer. Alexander Brandon gave a shoutout
to both Katamari Damacy and Rez, and Brad Fuller said
he missed being the sole person responsible for a game’s entire audio,
which he feels made the game’s audio more cohesive.

This was an fun panel that I guess you would have been there to
appreciate. The group talked about tips to use when trying to generate
various moods, then went on to take requests from the audience. Laura
Karpman played some excellent musical accompaniments that embodied
whatever random moods the audience came up with, and she did it on the
fly.

Scoring Hell: How We post_date the Score for EA’s Dante’s
Inferno from Inception to Final Implementation
Garry Schyman, Paul Gorman

We had a great time talking
to Garry Schyman about this
score last month. The panel focused on their inspirations for the
various pieces of music along with lots of samples of the music in the
game. Some interesting tidbits were that the audio team thought of Hell
as the main character, and there was very little reused music. 111
pieces of music were written for the game, averaging 12 unique minutes
of music for each circle, and the recording took place in Abbey Road as
well as Los Angeles. The language they used was Enochian, which is
supposedly the language of the angels (Lucifer was a fallen angel, and
therefore would speak this language), although Schyman noted several
times that he took a lot of liberties with the language, and modified it
to his needs. They showed a funny photo of the original Donkey
Kong upside down, and noted that Dante’s Inferno is
basically a Donkey Kong level upside down. Lastly, they tried
to license “St. Matthew’s Passion” and were turned down by the copyright
holder, and the team specifically tried to avoid sounding too much likeGod of War.

This was not an audio panel, but Sakamoto noted while mentioning the
various studios that Nintendo collaborated with on Metroid: Other M
that Kuniaki Haishima is doing the music and that it will be
orchestrated. I don’t know he was referring to the entire game or the
cutscenes (he had been talking about the video team who handled the
trailer), or whether or not orchestrated means orchestral samples or
live orchestra, but we’ll be working hard to find out!