We recently invited the GANG 2014 Student/Apprentice Sound Design Winner Thomas Couchard to interview the prolific Watson Wu. Watson has been creating audio content for film, TV, ads, and video games since 2001, while working on AAA titles such as Assassin’s Creed, Transformers, NCAA Football, Madden, The Need for Speed franchise, Red Orchestra 2, Operation Flashpoint, Warhawk, and many others.  You can find more details on Watson’s work and links to his sound effect libraries here. 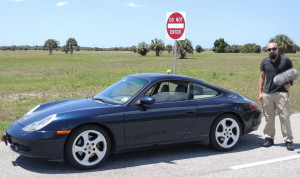 TC: You recently released three sound effects libraries: Porsche Carrera, Ferrari Dino, and Rifles & Pistols of The World Wars. Can you give some tips and tricks on making these kinds of recordings?

WW: Recording both weapons and vehicles are two different beasts to conquer. With weapons, my role is to try and capture all of the extreme loud transients from multiple perspectives and distances. On the other hand, only select microphones are used to capture the needed engine, air in-take, cab, exhausts, and external passby sounds. Having as much high quality gear with trial and error is the key.

TC: With your experience in both of these types of sounds do you still have surprises when you go out and record them or do you have the whole process completely figured out?

It’s here and there that something does surprise me. For example, during the session for Rifles & Pistols of The World Wars sound effects library, I gained access for us to shoot the WW1 & WW2 weapons over a large pond (more like a small lake). Sound reflects differently when shooting over the water vs shooting over foliage or the desert. Whenever the wind shifted during this session, the gun tails would often sound different from one shot to the other. This was great as my goal was to provide 10 variation shots per perspective, which is perfect for game audio. In the future I’ll look for more water sources to shoot over. 😉

TC: Could you talk about your recording process and gears for these kinds of sounds?

WW: It all depends on what and how much the client wants. Some want simple stereo sounds where as others want as much as possible. Last year I was hired to work on Ghost In The Shell Online game. We ended up doing 22 multi-tracks for a 7 straight days recording session of over 40 machine guns, pistols, sniper rifles, and explosions. The array of mics were plugged into my Sound Devices 442 field mixers, and then routed into the Sound Devices 788T-SSD field recorders. I use this method because these field mixers have built-in analog limiters that are needed to deal with the incoming loud sounds. During a session with the Need for Speed EA team, we were recording super loud GT race cars on a track. My ears have never been in so much pain, which prompted for me to buy the Remote Audio headphones. These super cans protect my ears and at the same time allow me to record and monitor Extreme Loud sounds. In a recent video I made for PortaBrace Audio (available on YouTube), I did recording and shooting both at the same time. You just can’t do that with regular studio headphones. What I also really like are my InstaSnakes, made by ETSLan.com. These small junction box pairs allow me to do long runs of audio signals using CAT5e data cable for several hundreds of feet. I have run over 650ft of cabling with these fantastic InstaSnakes! Visit http://etslan.com/feedback_watsonwu.cgi for more details.

TC: You are known for your expertise in weapons and car sounds. Do you get most of your work by clients needing rare sounds belonging to one (or both) of these types or is it a small part of your projects?

WW: Most of what I do is Work for Hire and most of my clients want their own customized sounds (for common as well as rare items). In this very competitive video game world, companies are always trying to out do each other with better visuals as well as better sounds.

TC: How did you start the field recordings for cars and weapons? Is it something that always attracted you?

WW: I have always loved sounds. When I was a child my family at one point owned an arcade. It was fun to have my own key and to play games after school. Those sounds were fascinating. Early in my career while I was composing music for some projects, someone asked me if I could do some sound design work. Without the needed source sounds, I decided to try and record for myself. I did own some recording gear so that really worked out. Some of these jobs had car sounds involved so I had to experiment with what gear I should rent and purchase.

Recording weapons was something I have wanted to try out. A long time ago I asked an associate who owned some rifles if I can record them. He agreed thus began my experiments. Successful experiments of recordings and designing then turned into real paying jobs

TC: You were recently involved in two projects, a movie name ’71 and a video game named Breach & Clear: Deadlines. Could you tell us more about these projects and the audio challenges you faced?

WW: For ’71, the film, I was hired to find, organize, and record the weapons. Because the film was about what happened during 1971, I had to find older handguns and a rifle that would match the era. I call these the Pre-Glock days (pre plastic gun days). Fortunately I was able to find owners of these specific weapons and rent them from the great guys. During the session here in the middle of nowhere Florida, it was actually a really cold and windy day. At a particular section in the shooting range that I rented, there was an older over hang that made too much flapping sounds so I decided to cut off the annoying sound with a tactical knife. I used select mics that can better handle wind and at the same time reject noises coming from birds and other unwanted sources. The sound department in England was quite happy with the results. ’71 should soon be available for rent on both Netflix as well as iTunes.

For Breach & Clear: Deadlines, I was hired to design certain high-end gun sounds. Because the game required a lot of rapid firing, it took some time to design and redesign single gunshots that wouldn’t annoy the user. To shape the specified sounds, I cleaned up some of my past raw gun recordings with RX4 Advanced, and then mixed the multi-tracks with Reaper DAW. At the end, I beefed up the gunshots with layering, EQ, and various Waves plug-ins. This Fun game is available on Steam.

TC: Working both in the movie industry as well as in the video games industry could you tell us if there is something specific that you really enjoy in one of these industries that you can’t find in the other?

WW: I love the challenges that are thrown my way when working in these two industries. There is always something to overcome. I would say games are more fun because games are non-linear. Moreover, games have variations of sounds reacting to what is the gamer is doing. Last, 60 plus hours of game play is better than a 2 or 3-hour movie.

TC: Does your workflow and your relationship with the clients change a lot between the video games industry and the movie industry?

WW: It depends on the client. The film industry has been around a lot longer than video games. They usually know what they want and are very specific. I often still need to be an audio educator to some of my video game clients. The non-audio employees who attend my field sessions are usually shocked at how much is involved, just to acquire good sounds.

TC: For both your last film and your last video game can you tell us a bit more about the size of the audio teams and your freedom of creation during the whole process? Also could you explain the overall audio process that you used? 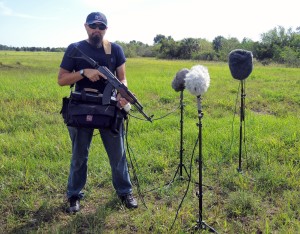 WW: For ’71, there were about 15 people in the sound department. You usually don’t see that many unless there’s a sizeable budget. I was given total freedom to see how I wanted to conduct the recordings. The studio gave some gun firing scenes, which were crucial for me to judge my mic placements, angles, as well as distances.

For Breach & Clear: Deadlines, I was the only audio guy hired to design the high-end weapons sounds. The challenging part of this game was that they wanted no or minimum amount of gun tail echoes for each of the gunshots. It was a bit of a work to make weapons sound that way without the over-sterilized feel.

TC: Regarding all of your activities which one is taking the biggest part of your time?

WW: I would say designing, editing, and mid to large size sessions take up most of my time. This changes week by week.

TC: How do you choose your projects according to your schedule? Example: If you are recording a new sfx library but when a game projects comes? Do you put the library on hold?

“Work for Hire” jobs are always first on my list. Library jobs are typically done when the opportunity arises or through a growing request from existing clients and/or e-mails. It took awhile to work on “Rifles & Pistols of The World Wars” library because of interruptions from various jobs as well as the difficulty of editing/mixing the multi-track raw gun sounds.

TC: Both the movies industry and the video game industry are filled with people with a lot of different skills (3D, Animation, Programming, Stunts, VFX, etc.), as a freelance are you in contact with them on a regular basis or do you talk mostly with the audio team?

WW: While it’s too tempting to only speak to audio people, I find it best to meet Everybody in these industries. I’ve met low-level VFX guys that later managed teams. Good skilled people are always moving up somewhere. Treat them well and they’ll remember you. This can lead to future jobs. 😉

Rob Bridgett’s book, FROM THE SHADOW OF FILM SOUND Released

Materia Collective – From Community to Publishing House and Label