HOW GAMES ARE (FINALLY) ATTRACTING THE ASCAP’S ATTENTION

VIDEO GAMES ARE THE PRECOCIOUS toddler of the media world. Young, unfazed by the rules our older siblings seem so confined by, and more than happy to chaotically wander off into new directions whenever we feel like it. At the birth of the game industry’s Silver Age— the dawn of the era of PlayStation 2 and Xbox—the established music industry never imagined that games like GUITAR HERO and ROCK BAND would become an interactive means of new music distribution. Nor did the home video market foresee the shift to an environment where movies are delivered digitally via PlayStation Network and Xbox Live. Time and again, the video game industry has changed the way established media is experienced, regarded, and defined. In the wake of our trailblazing, traditional media and the mechanisms it long ago established are scrambling to keep up and adapt to the new world we’re creating.

Part of the old media infrastructure chasing gaming’s innovations is The American Society for Composers, Authors, and Publishers, or ASCAP as it is more commonly known. After decades of disinterest in the music of interactive entertainment, ASCAP is now actively making a play for the inclusion of game composers into its ranks.

ASCAP GIVETH
» At its core, ASCAP is a performing rights organization that collects money in the form of royalties for the “non-dramatic live performance” of copyrighted music registered with it by its members. In practice, ASCAP defines “live performance” rather broadly and includes everything from television to radio airplay to music played within malls, restaurants, airplanes, and telephone on-hold applications.

When registered music is “performed,” ASCAP collects and distributes writer and publisher shares of the royalties to its members. If music isn’t registered with ASCAP, ASCAP Licensees—such as TV networks and radio stations—still pay royalties for its performance. ASCAP then divides any unclaimed royalties up between its registered members.

This year, ASCAP woke up to the spreading influence of games and the notion that game scores no longer sound like those of 30 year-old arcade cabinets. In May, ASCAP reached out to game composers and sound designers. Their intent was to educate music creators about rights and royalties that have long been regarded as either off-limits or too difficult to obtain within the game industry.

With almost all game audio contracts falling into the work-for- hire vein, content creators are used to signing over all rights and claims for a full buy-out payment. ASCAP’s point is that film and TV composers are also frequently forced to sign work-for-hire contracts, but that they negotiate for the ability to collect performance royalties. At the heart of the argument is the notion that, while a corporation can claim the publisher share of royalties, corporations cannot claim the writer share. As such, money is being left on the table unnecessarily that could be claimed by the content creator without being at the expense of game developers or publishers. Secondarily, were game development companies and publishers to register themselves with performing rights organizations as the music publisher for a given title, they would open themselves up to a new stream of revenue in the form of the publisher share of royalties.

In order to be able to claim the writer share of royalties, composers would need to first negotiate into their contracts with the game’s developer or publisher the ability to register their material with a performing rights  organization. ASCAP has suggested the following sample legal text as a basis for these negotiations: “Composer shall be entitled to collect the ‘writers share’ of public performance royalties (as that term is commonly used in the music industry) directly from a public performance society that makes a separate distribution of said royalties to composers and publishers.” 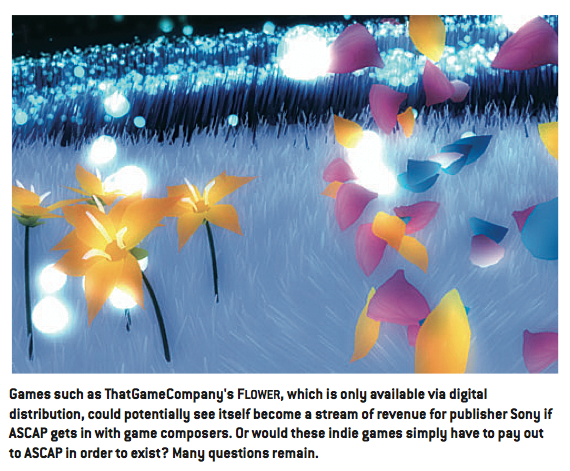 ASCAP TAKETH AWAY
» While ASCAP is now actively trying to welcome game composers into its ranks, it is also trying to expand the definition of “live performance” so as to include a slew of new media applications and thereby widen the scope of licensee companies who pay royalties to their members. Among those new media applications targeted, ASCAP is claiming that digital distribution of games via Xbox Live and PlayStation Network—since it is done via the Internet—now constitutes public performance of the accompanying music scores for downloaded games.

Whether ASCAP will be able to convince publishers and first-party companies like Sony and Microsoft that digital distribution represents a new, legitimate stream of royalties for its members remains to be seen. In October, ASCAP lost its previous legal claim that telecoms owed royalties for cellular phone ringtones being played in public spaces when a subscriber receives a call.

So far the other major domestic performing rights organization, Broadcast Music, Inc. (BMI), has
yet to follow suit and aggressively reach out to game professionals with the carrot of royalties. But rights organizations network with each other across the globe, and successful ventures into new technologies will eventually become standardized practice throughout the traditional mechanisms of the music industry. What is abundantly clear is that game innovations continue to ripple throughout the media world. As they do, more and more opportunities are presenting themselves to the audio professionals who are helping to drive those innovations.

Apple’s iPhone Faces Off With the Game Champs